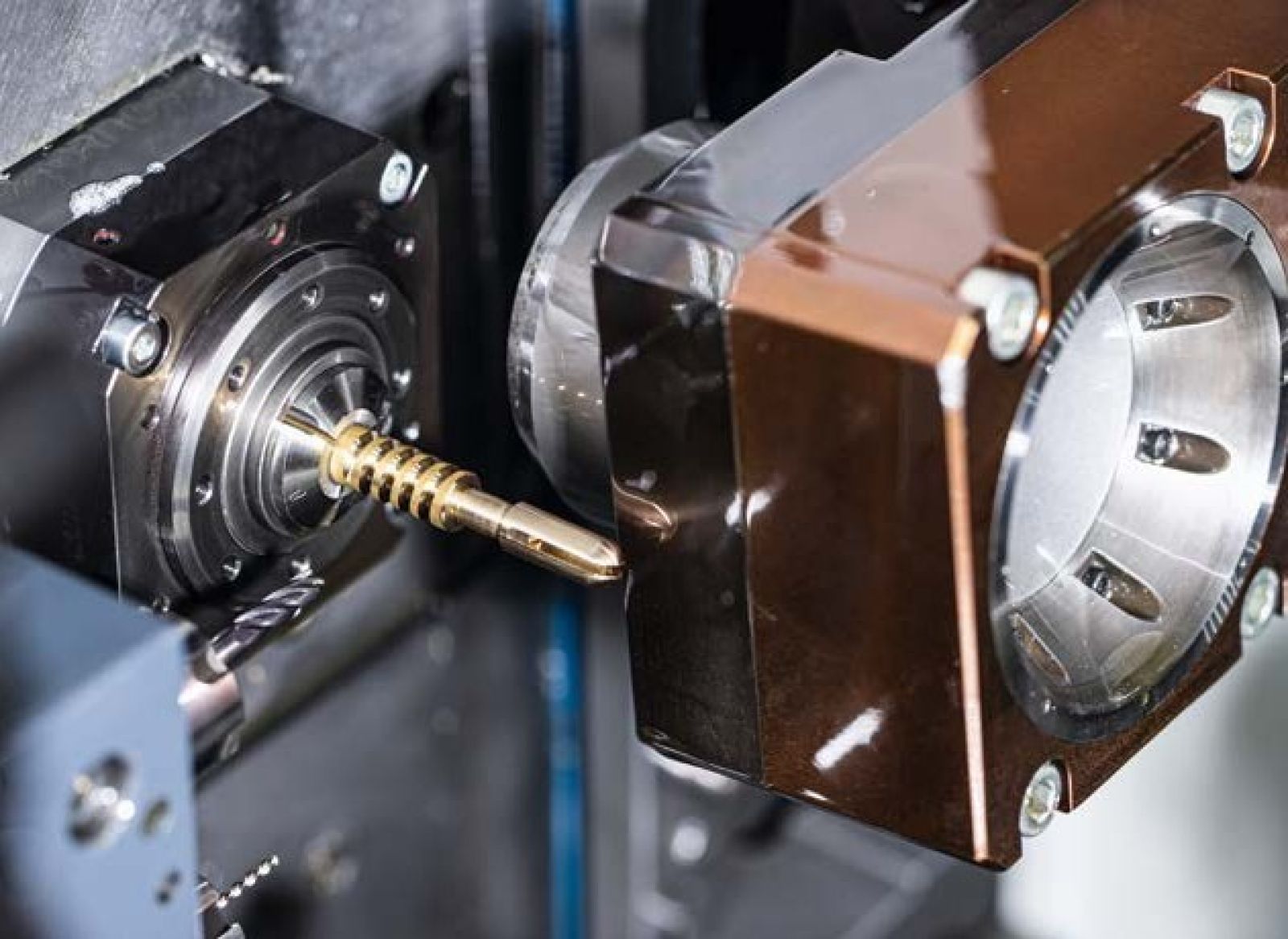 Music makes people happy one moment and can bring them to tears the next. It can help drive people to peak performance in sports, or make them anxious. But one thing that music never does is leave you cold. And the guitar evokes more emotion than virtually any other instrument. Whether around a camp fire or at a rock concert in a stadium, the way guitars work is always the same. Schaller GmbH, based near Nuremberg, has been dealing with the functioning of this plucked instrument for over 75 years. During this time, the company has become the world market leader in guitar parts. With modern machinery, the team led by plant manager Dominik Weininger turns and mills the precise components required to produce excellent sound quality. It also relies on the internally cooled whirling system from Tübingen-based Paul Horn GmbH.

Schaller GmbH specialises in machine heads, bridges, tremolos and strap locks. Helmut Schaller founded the company at the end of 1945 as a repair workshop for radios and other electronic devices. In the early 1950s, he began to develop amplifiers and speakers for musical instruments. Through a business partner- ship with an instrument maker, Schaller began devel- oping and manufacturing guitar parts. By the 1960s, Schaller had become one of the most prominent guitar accessories suppliers in Europe. The reputation of Schaller’s machine heads in particular precedes it. The M6 machine head was the world’s first fully enclosed and self-locking precision machine head. 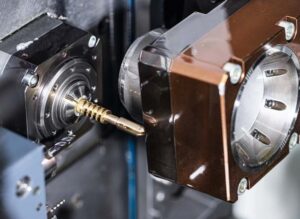 Jet whirling has reduced the machining time
for worm threads by half, raised quality and ensured an increase in tool life. 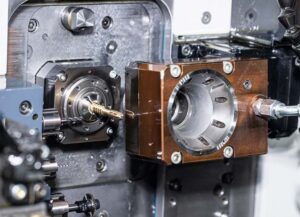 Since then, leading international guitar manufactur- ers such as Gibson, Ovation and Fender have relied on components from the Bavarian music factory.

The machine heads on plucked instruments are used to tighten and tune the individual strings. They are at the top of a guitar and have a transmission to ensure a high degree of precision when tuning the strings.
Other important properties are ease of movement and stability due to the self-locking mechanism. The higher the precision of the components, the higher the quality. The transmission of the machine head uses worm gears, as these are the only gears to enable precise adjustment and reliable self-locking.

A central part of the machine head is the adjusting screw with the worm thread. Department head of CNC turning and milling Nicole Gawatsch saw potential for improvement in this thread. “We pre- viously milled the worm thread with a side milling cutter. The machining time required was too long for us and we often had to take the part and re-clamp it by hand”, Gawatsch explains. “We became aware of Horn’s internally cooled jet whirling at AMB 2018 and immediately contacted our Horn sales representative”, continues plant manager Weininger. Initial discus- sions with Horn about the new whirling system and the start of the project quickly followed.

With the jet whirling system, Horn launched the first whirling tool to feature an internal coolant supply.
This whirling system offers optimised cooling directly at the cutting edge and was developed by Horn in conjunction with W&F Werkzeugtechnik. The major challenge was to bring the coolant directly to the cutting edge in a confined space and to do this at high whirling speeds. The cooling channels partially integrated in the insert seat direct coolant to eachcutting edge. In addition, the coolant flows through the chip space. By cooling the cutting edges directly, this system enables long tool life to be achieved.
What’s more, when used in conjunction with the stable whirling unit, the system achieves better surface quality on the workpiece. Thanks to the patented W&F interface with its face-and-taper contact system, the whirling head boasts high changeover accuracy and is easy to exchange with just three screws. The internal coolant supply reduces the risk of chip build-up between the cutting inserts, which offer radial and axial run-out of 0.003 mm (0.0001”). The maximum speed is 8,000 rpm.The first tests at Schaller were not an instant success. “The problem was that the coolant pressure of the machine was too low. The whirling unit requires a high coolant pressure for satisfactory operation, but the machine only delivered a low pressure”, explains Horn sales representative Peter Rümpelein. After producing 20 000 parts, the bearings of the whirling unit had to be replaced due to insufficient cooling.
Nicole Gawatsch then moved the whirling process to a Tornos Swiss GT sliding-head lathe. The large pump capacity ensures the high coolant pressure is deliv- ered. “The high pressure provides cooling and lubrica- tion for the unit”, says Rümpelein. 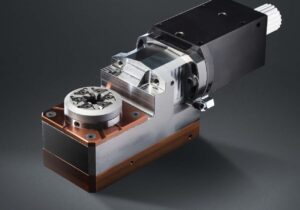 After a delayed start, the whirling process now runs reliably. “The whirling unit has been running 24/7 in the machine for over a year. We are very satisfied with the tool system”, says plant manager Weininger. The successful change in the process is also reflected in the processing time. Previously, Gawatsch needed about a minute to mill the worm thread. Conventional whirling takes 40 seconds. “With inter- nally cooled whirling, we have halved the machining time to just 20 seconds per component. Given the incredibly high number of components we process each year, this is an enormous saving”, Gawatsch explains. In addition to the reduced machining time,the surface quality of the finished compo- nents is also improved significantly. Moreover, the service life of the indexable inserts has increased many times over. 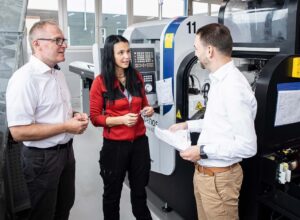 A successful partnership:
Peter Rümpelein (Horn) talks to Nicole Gawatsch and Dominik Weininger (both from Schaller).

Only one version of the whirling head with insert seats for the type S302 indexable insert is used at Schaller. “We only need to change the inserts for the different threads”, says Gawatsch. For whirling, the S302 system, which has three cutting edges, is mainly used at Horn. There is a high degree of manufac- turing precision when it comes to grinding the cutting inserts. The three cutting edges are subject to a length tolerance of less than 0.005 mm (0.0002”) when turned. This ensures the excellent concentricity of the entire system, the high changeover accuracy when indexing the inserts and the outstanding surface qual- ity. “The cutting edge profile of the S302 system can be adapted to almost any special requests from the user, whether it’s for single or multi-threads”, explains Rümpelein.

The whirling method has been around since 1942 and hadn’t seen any major developments for a long time. Conventional thread whirling is a method that is primarily used on Swiss- type lathes to produce bone screws, or on a large scale, to produce threaded spindles.
To implement the process, a rapidly rotating whirling head is positioned in front of the guide bush of the Swiss-type lathe, eccen- trically to the workpiece axis. The rotating workpiece is fed axially into the whirling head, which is pivoted to achieve the specified lead angle of the thread.