What to Do When Five-Axis Machining Is Off the Table 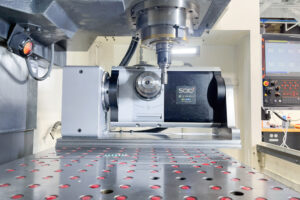 Inside the Mazak VMC, the pL LEHMANN table is positioned on the far right-hand-side of the worktable, allowing for additional vises and machining operations to take place on the left. Photos: Brent Donaldson

For Fischer USA, 3+2 machining with a high-precision rotary
table adds flexibility without the cost of a full five-axis machine.

When is a three-axis vertical mill, equipped with an aftermarket two-axis rotary table, preferable to a true five-axis machining center? Ask Fischer USA.

At the Fischer USA headquarters in Racine, Wisconsin, a Mazak VCN 530C fitted with a pL LEHMANN 5AX rotary table allows for 3+2 (or «positional») machining, in which the rotary table positions the workpiece for three-axis operations. According to Ryan Krause, Fischer USA senior manufacturing engineer, and Michael Guzman, manufacturing engineer III, the 3+2 configuration provides the necessary machining flexibility at a considerably lower cost than a full five-axis machine (that is, one that moves all axes synchronously during the cut). 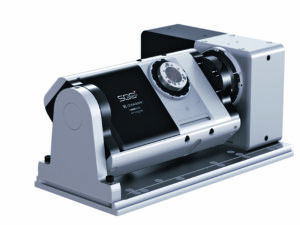 Capability to accommodate large parts and multiple-part setups provides additional flexibility. Recently, Fischer Spindle invited me onto the shop floor to see the customized machine for myself.

Pay for What You Need

Based in Herzogenbuchsee, Switzerland, The Fischer Spindle Group specializes in precision spindles, milling heads and air compressors for fuel cell technology. Although Fischer USA wasn’t established until 2006, Fischer spindles and milling heads have been popular choices for machine tools in the U.S. for decades.

Fischer USA specializes in both spindle production and spindle repair. The repair side of the business comprises about 75% of the machining work, and that business is booming. Ryan Brath, managing director of Fischer USA, says that machine tool spindles typically require a full rebuild after 10,000 hours of use – a target that can be reached relatively quickly in applications such as aerospace aluminum milling.

On Fischer’s shop floor, all of the machining work is spread across several CNC lathes and grinding machines, as well as a Mazak Integrex mill-turn. In 2021, the company added the 3+2 machine, which was assembled and tested with a 20,000-rpm Fischer spindle and pL LEHMANN two-axis rotary table before shipping from Mazak’s North American headquarters in Florence, Kentucky. 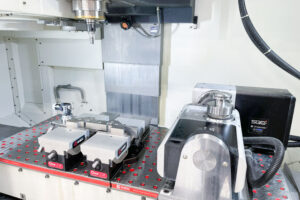 On the Mazak VMC, the setup often includes a Chick or Lang vise holding parts on the left side of the worktable and the pL LEHMANN two-axis rotary table holding a part on the right. A clever workholding solution devised by the Fischer USA team allows for parts positioned on the pL LEHMANN table to be flipped and machined radially and axially on both sides with the table’s ability to flip the part 180 degrees.

Krause and Guzman cite two primary reasons for choosing the 3+2 configuration. One was need. Efficiently accommodating a varied mix of repair work and new parts leaves no time for the multiple three-axis setups that complex parts, such as encoder wheels, cylinder components, bearing flanges and nuts, would otherwise require. Five axes of motion offer the flexibility to leverage shorter, more rigid tool assemblies to access more of the workpiece in one setup.

The second (and predominant) consideration was cost. As useful as a five-axis machining center might be, the cost differential with the three-axis machine amounted to a six-figure sum, even with the addition of the rotary table. Overall, Krause and Guzman have found that the pL LEHMANN table allows for a degree of flexibility in its approach to machining these parts that is more than sufficient.

The Fischer USA team considers the Mazak VMC and pL LEHMANN table to be a step in between the shop’s former machining routines and a full five-axis solution — a happy medium that allows running turning operations first, then handing parts over to the Mazak VMC for multiple milling operations in one setup.

On the Mazak VMC, the pL LEHMANN rotary table is positioned far to the right side of the worktable, while orienting the unit with the gear box in the back further maximizes table space. The Fischer team often sets up two parts at once: one on a vise, and one on the rotary table.

The ability to machine parts radially and axially in one setup is a prime advantage of the pL LEHMANN table. For example, machining spindle shafts once required removing the part for a second setup, using the blind holes machined in the first op to position it. But now, custom-machined soft jaws clamp the OD of the spindle shaft in a Lang vise. With the rotary table, the part can now be radially machined on one side, flipped 180 degrees by the table, then axially machined on the other in a single setup.

Similarly, the rear covers of Fischer spindles were originally produced from castings, but that resulted in high tooling costs for a low-volume part. Fischer now machines the parts from raw slugs. After turning operations, the vertical mill and rotary table can handle all milling in a single setup.

Manufacturing high-precision spindles requires high-precision machining, particularly in the case of encoder wheels. These gear wheels contain hundreds of teeth that, through an electrical sensor placed inside the spindle, encode the rotational position of the spindle shaft as well as its speed. The pL LEHMANN unit’s radial and axial accuracy, as well as its rigidity, are paramount to precisely milling these gear teeth on the Mazak VMC, Krause says. «We’re able to machine the wheel, perform a check, and we’ll have less than five microns of radial runout, which is excellent.»

Krause says the unit’s HSK «ripas» spindle interface is critical to success. «HSK» is a German abbreviation for «hollow taper shank.» This interface style, referred to by pL LEHMANN as «ripas,» differs from more common (at least in the United States) steep-taper shanks in several ways. The clamping mechanisms of HSK shanks are internal, and contain separate draw bars that lock the shank securely into the receiver. Studies have shown that the extra clamping force provides up to five times the radial stiffness of a standard steep-taper shank.

The pL LEHMANN table’s ripas unit consists of the HSK interface, the ripas adapter (the gripper unit that connects the HSK to the fixture or workholding) and the keyways that position the adapter rotationally in place. Guzman says these keys are also a differentiating feature in terms of maintaining tight positional tolerances that reduce the need for runout checks.

This level of precision also enables Guzman to create fixtures with locating pins that can be stored and reused for repeatable positioning of any given part. «The next time we want to run this part, because each fixture has a certain orientation to the pL LEHMANN table, it will be a very quick changeover. Probably under 30 seconds,» Guzman says. 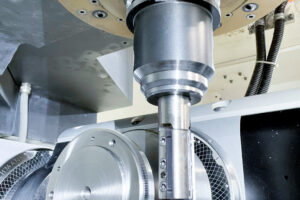 This encoder wheel features hundreds of teeth that, through an electrical sensor placed inside a Fischer spindle, encode the rotational position of the spindle shaft as well as its speed. When machining these parts, the pL LEHMANN table’s radial and axial accuracy, as well as its rigidity, are paramount to precisely milling these gear teeth on the Mazak VMC.

For Krause, the choice of a a 3+2 configuration with the Mazak VMC and pL LEHMANN table comes back to cost and need. «We really wanted to go into this and customize a machine that fit our business need right from the beginning,» he says. «You could look at a lot of our work and say that it would really be nice to have a five-axis machine, but we need to have the
flexibility of very large parts on the table while utilizing the pL LEHMANN for things like axial work, radial work and angled holes. Ultimately, that meant building the most flexibility that we can for the future.»

… the Swiss manufacturer of CNC rotary tables and other components for metal machining, is an experienced machine construction company, whose rotary and swivel axes have proven their worth in production for over 40 years. In addition to these products, which often make three-axis drilling and milling machines into more productive four- or five-axis machining centers, you can also find a variety of workpiece clamping systems in the product line.

Founded in 1960 strictly as a contract manufacturer, pL LEHMANN has been developing and producing CNC rotary tables for over 40 years. With innovations and Swiss quality, the family-owned company in the Swiss town of Bärau (Emmental) succeeded in opening up new opportunities for its customers and developing lean machining solutions characterized by high productivity through use of additional NC axes. One of the highlights of the company’s history is the powerful and flexible Series 500 – developed in 2009 – which is ideal for the most demanding tasks thanks to its modular design. With the backlash-free, preloaded PGD gear unit – developed in 2014 – pL LEHMANN reached another milestone. In 2017, the company introduced, among other things, the new pL-iBox generation, making their rotary tables ready for Industry 4.0 and digital production. This was followed in 2019 by the introduction of the Series 900 DD (Direct Drive) rotary tables with speeds of up to 5,450 rpm. As an additional new product, the AM-LOCK system, a special zero-point clamping system for 3-D printing, including preprocessing and postprocessing, was presented for the first time in 2019.